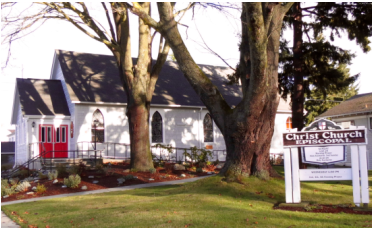 Built in 1891, this charming historic church, described as “a carpentry Gothic revival church,” was funded by the Episcopal Diocese of Olympia and contributions from the congregation and other citizens of Anacortes. It's likely the church was built from a kit, as others of the same design are common. In 1897, the altar and reredos, purchased from a Roman Catholic church, were shipped from New York City, around Cape Horn, and north to Anacortes. The baptismal font and lectern were donated by the Altar Guild. In 1905, through the efforts of the Women's Guild, two adjoining lots were deeded to the Episcopal Diocese by Fanny Mae Curtis, sister of Anna Curtis Bowman, namesake of Anacortes. Both women were members of the congregation. The vicarage was built in 1915 and much later remodeled as a parish hall by Bill Turner. In 1916, the pews, acquired from the original Presbyterian church, were installed, replacing spindle-back chairs seen in the photo displayed at the entry. In the 1980s, James Parry created the stained glass windows. About the same time, the entry doors were replaced with hand-carved doors. When closed, the doors form a Celtic cross, and the four stained-glass portals depict the seal of the Episcopal Church. In 2014, an enclosed narthex, reflecting the original church architecture, was added. The carved doors are preserved and displayed in the narthex.
The Red Door Thrift Shop is operated by Christ Church and contributes more than $40,000 annually to community outreach. A very dedicated volunteer base makes this possible. Gentry House, adjacent to the parish hall, is an adult day center serving clients with Alzheimer's and other dementia-related conditions. The facility is also church property.